And Now, For Something Completely Off-Topic

A few days ago, a good friend of mine showed this blog post to me. As a native of Long Island, I find it impossible to not respond to someone who says that all my family, friends and I live on “one of the most intolerable, despicable, grimy, disgusting, vile, filthy, overpopulated mounds of fecal matter to ever bedevil the history of man.”

The writer, Frank Swift (or A Geek In The Wilderness, as he self-describes himself by the name of his blog), who grew up on the island, may have some personal vendetta against his old haunts, or he is simply unaware of American society, in general. Mr, Swift quickly references that an old professor of his once mentioned that Long Island has the largest percentage of mental institutions per square mile, in the country. I couldn’t find any statistic to support this. Also, what he fails to point out is that Nassau and Suffolk County are also two of the most populous suburban counties in the United States. Nassau, according to the 2010 Census, is the 20th most densely populated county in America. The more people you have, the more you’re going to need services – like fire stations, police stations, hospitals, gas stations, shops, and yes, also mental institutions – to provide for them. This is one of the most fundamental principles of our society, but I guess Mr. Swift never thought about that because he was too busy blaming it on our water.

There is quite a lot of that. This is, as you might have guessed from its name, an island.

Mr. Swift says that, as a people, Long Islanders (I hate using that phrase) have “an unusual proclivity for bipolar behavior… There was no consistency to the way people reacted,” claims Mr. Swift. That can’t be true, considering that every person from Long Island that I know of who read his blog post had the same, negative opinion of Mr. Swift as everyone else. Speaking of consistency, the further you read his post, the more you will notice the inconsistency of someone claiming to be better than everyone else writing a holier-than-thou treatise complaining about people who think they are better than he is.

I’ve never been a permanent resident elsewhere, but from my time in Oswego, I learned that upstate folk and downstate folk are inherently different from each other. Yet in my circle of friends that consisted of a fair amount of people from both locations, we were as predictable as the rising of the sun. What wasn’t predictable was how residents of Oswego felt about us. Contrary to Mr. Swift believing that “social circles outside of Long Island tend to be less rigid and more open-ended” an “townies” opinion of a student at the school could range from that of “a degenerate that is ruining our town” to “a mild annoyance.” Again, my experience is limited to less than eighteen months worth of time, but outside of the bus drivers that transported my friends and I from campus to downtown, I cannot remember ever having any meaningful conversation that a townie started.

So Mr. Swift then gives strong evidence that Long Island natives are deranged. “I remember one in particular during my junior year, a friend of my then best friend, who once got funky with his girlfriend’s mom in the backseat of her car… while her father filmed the whole thing from the front seat.” That’s pretty sketchy, but probably mild in comparison to the 14 states (and one district) where it is still legal to have sex with animals. I wonder what Mr. Swift’s opinions are of people from Alabama, Connecticut, Hawai’i, Kentucky, Nevada, New Hampshire, New Jersey, Ohio, Texas, Vermont, West Virginia, Wyoming, and as previously mentioned, Washington D.C. I can’t wait for scathing reviews of societies from those “disgusting, dirty, vile” places.

I’ll admit that Frank Swift had me convinced that, at first, he wasn’t completely delusional. Then the dumbest line ever written in human history was typed. “Long Island is just… ugly.” 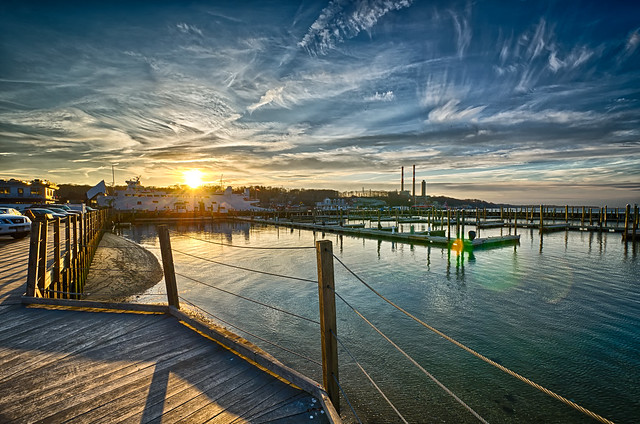 I rest my case.

In fairness, it’s true that there are too many places like, well the town I’m from (Holbrook), and not enough places like Port Jeff, or Cold Spring Harbor. To write off all of Long Island because half of it is becoming dangerously more urban than suburban would be like saying that all NBA players are terrible because half of them don’t know the fundamentals. And yes, there are an incredible number of people living on a speck of land that is roughly 120 miles long, and only about ten miles wide. However, it takes only a Google search, or an adventurous soul to realize that there are places where you can go to escape the massive amount of people, without having to drive all the way to Farhampton.

Finally, and thankfully, Mr. Swift wraps everything up by blaming the cost of living (admittedly, it’s at an inhuman level) for his poor romantic life. Somehow? “I can’t relate to people who have had it too easy or too good, whose concept of suffering is a barista mistakenly pouring soy milk instead of almond milk into her latte,” Mr. Swift states. The amount of people that this actually applies to is, in reality, quite low. Perhaps it’s because I learned at a young age to disregard people who thought they were better than me, but most, if not all of the people I associate with are courteous, hard-working, and simply trying to make ends meet in a place where it is nearly financially impossible to do so without a six figure job.

Mr. Swift, I work two jobs, amounting to just under 70 hours a week, and that’s just so I have enough money to pay my student loans and make my car payment. Fortunately, I was blessed with parents (who are also Long Island natives) that make enough money that they can still provide for me while I desperately find a way to become completely financially independent. And that’s not because of native islanders, lattes, or rich kids driving their BMW’s bought with money from a trust fund. That’s a product of the broken American economy, whose bubble surged up so high that prices for houses on Long Island average at just under a half of a million dollars, only for that bubble to burst and leave the millennials with a limited amount of jobs that pay an outdated minimum wage.

Yes, you do have the rich elite who think that they are better than everyone else. Go to Boston, and you’ll find the same sort of people at Harvard. California has Orange County. Connecticut has Yale yuppies. The D.C. area has Fairfax County. Rich girls from upstate were just as spoiled, materialistic, and self-centered as rich girls from Long Island. Wherever you go, you’re going to run into a place where the people with money will act as snooty as pre-revolutionary French aristocrats. It’s a simple fact of American society. If you’re concerned with their opinions, Mr. Swift, then you must have a very weak skin.

So Frank Swift finally prepares to make the jump to lightspeed and get off of Long Island, leaving the rest of us to get on with our inferior lives. How will we ever survive? Probably by going downtown and enjoying a six dollar beer, enjoying a slice of pizza, and having a laugh at there being one less crazy Long Islander (man, I hate that phrase!) to deal with.

This entry was posted in Uncategorized. Bookmark the permalink.

2 Responses to And Now, For Something Completely Off-Topic